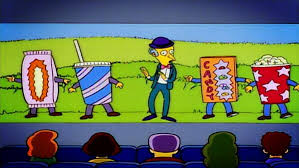 There were 24 minutes of advertisements before a movie at my local cinema recently. The film was close to three hours long, and adding nearly half an hour was a bit fucking much.

It's particularly galling when it costs so damn much to go the movies in the first place - it's becoming a real luxury - and you're such a captive audience that you can't get away. You can skip past the endless Grammerly ads on Youtube, or go and make a cup of tea while broadcast TV tries to sell you shit, but in the cinema, you're stuck in your seat and just have to put up with it.

At the very least, they could have cut out the two ads telling me to buy really fast cars, and then they wouldn't have had to have the two road safety ads telling me to slow down. They all cancelled each other out, so what's the fucking point?