Action is my reward: Exploitation comics 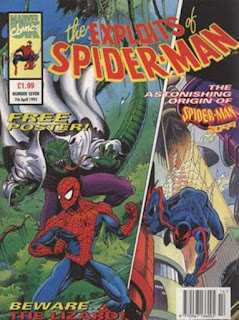 The last Spider-Man comic I ever regularly bought wasn't even a real American one. It was a British reprint comic in the mid-90s, and it was enormously satisfying and value for money.

The Spidey adventures had been split between several different titles for years, and it was impossible to keep track of them all when I never lived anywhere near a comic shop. I'd spent years getting a third of storylines, and making do with that.

But The Exploits of Spider-Man reprinted recent Amazing, Spectacular and Web comics, while also fitting in some more Ditko, Spider-Man 2099 and... well... Motormouth. Not every one can be a winner.

Each issue was dense with Spidey action, with the art splashed across a larger magazine size, while keeping the colouring that so many other similar reprints lacked. Each issue offered up dozens and dozens of pages of spider-action, and I could actually follow storylines as they were intended to be read, instead of piecemeal over years. And there was a free poster in every issue, at one stage featuring classic Marvel covers that hung on my walls for years after I stopped getting the comic.

Spider-Man is always better in huge chunks of comics. Even with the Motormouth.
Posted by Bob Temuka at 11:45 AM