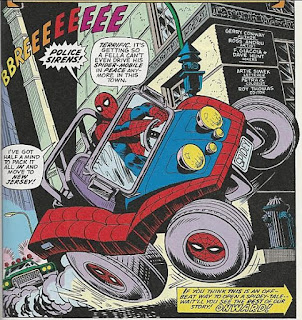 I used to own hundreds and hundreds of Spider-Man comics and now I have about 30. The ones that are left are, unsurprisingly, the ones that came out when I was a little kid.

I remember how groovy Spider-Man was, when he had wide-ranging adventures in glorious primary colours, and those are the only Spider-Man comics I still want. There have been many fine Spidey comics since, but none that I've ever felt I had to hold onto, not like the 70s version.

Poor Gwen dies so the Green Goblin has to go too, Denny O’Neill and Frank Miller do a Spider-Man/Dr Strange team-up that is still creepy and awfully funny, the regular comics have some Captain Britain, Man Thing, Fantastic Four and Punisher action with terrific Byrne and Andru art, and the classic Saturday Night Live cast being really, really silly.

I'm in the middle of another purge, and the Spider-Man comics from this era that I still have aren't going anywhere. I could never give these away. They're all I ever want in Spider-Man.