Action is my reward: The weight of water 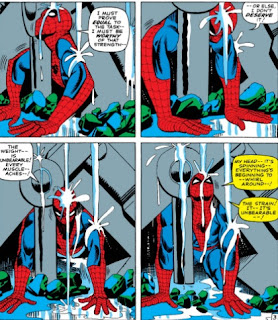 It's been homaged and ripped off more than a dozen times and it never gets old: Spider-Man is trapped beneath a huge piece of machinery, while waters pours down, and he just needs to get the hell up.

It keeps coming back over and over again because it is so incredibly effective. It's the periodical moment where Spidey gives in to weakness for just a split second, before rallying to lift the world off his shoulders, and go and punch the fuckin' Vulture or somebody. It happens reasonably often, as the always-observant Douglas Wolk has noted.

The waterisn't just dripping down on Peter Parker's head, it's flowing with weight and volume, pooling on his head and cascading over his arms. Ditko's water looks just as heavy as that machinery, and is a vital ingredient of the scene. Ditko could draw anything, from weird surreal hell dimensions to the best fingers in comics, but nobody can make water as heavy as Steve.
Posted by Bob Temuka at 3:42 PM