Dead People I Have Known, by Shayne Carter: It's not for you to say 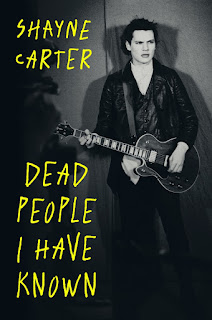 I used to think Shayne Carter was the coolest motherfucker alive when I saw him around in Dunedin in the mid-90s, scowling into a southerly wind on George Street, blasting his guitar in solo gigs at the Empire, or bitching with Roy at Records Records. I had just left home and never had the guts to go up and tell him how much I loved the Straitjacket Fits, but he looked like he had it going on.

I've been reading his new biography about his relationship with music, the people it has brought him into contact with and the places he's traveled to for performances, and it's fucking excellent. Carter's sly wit is everywhere, and it's constantly laugh-out-loud funny, from his recollections of getting into drunken feuds with other musicians to the brilliant revelation of what his favourite record was when he was 10.

But he has also shown that so much of that cool aloofness was a defensive front, and he was just as much a mess as any of us, especially after the tragic death of his best mate in a dumb train accident. Even as he's out there trying to conquer the world with his shredding guitar licks, he's miserable and worried that everything he does is not worth the effort.

I can't speak for how he feels about his work, but Carter has created some incandescently great music with the Fits and the Doublehappys and Dimmer, and he's left behind a legacy in NZ music that is unmatched. To find out that he's just as screwed up as anybody else doesn't tarnish that at all, it makes his riffs soar even higher, to know he's finding his own way out of that misery.

I just wish I had bothered to tell him how much his work meant to me all those years ago. He might just have sneered at me, but the coolest of us could still always use a kind word or two.
Posted by Bob Temuka at 12:54 PM