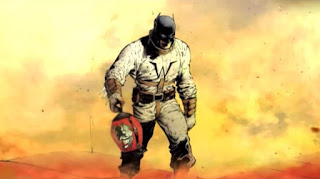 Mainstream superheroes are trapped in never-ending cycles of reboot and rebirth, so there is always something appealing about an actual ending, when somebody tries to put their last word on a character, especially if they've been working on them for a while. The desire for a full stop - the last, definitive story, an epilogue to all that has come before - is strong, even as the next issue of Batman comes out next month.

Scott Snyder and Greg Capullo have created a butt-tonne of Batman comics in the past few years, and have said just about all they have to say with the character, but they're getting in one last shot with the current Last Knight On Earth story.

And after one issue, they've already nailed one of the best things about this type of story, and are throwing everything into the mix. There are goofy puns, super-science and existential dread. The story starts on the mean streets of Gotham, gets in some classic Batman-in-the-asylum stuff, has Alfred making one last plea and a Joker in a bowl, before Bats even gets his suit on and heads out into a dark, dusty future.

It's not really doing anything new, but is happily divorced from the main continuity, which has become so polluted. And it's as gorgeous as anything else Capullo has done with the character, which sparkles beneath the neon colors that have worked so well on his Bat-comics ,giving life to the end of the world.

And, best of all, it has nothing to lose, and anything could happen from here. There have been dozens of 'proper endings' to the Batman saga, but there is always room for one more.
Posted by Bob Temuka at 12:14 PM