Action is my reward: A creation drama without end 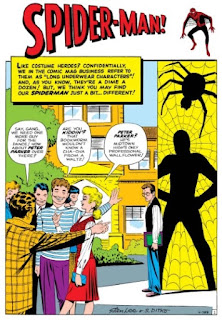 The creation myth behind Spider-Man is elusive and contradictory, and always will be, because the main people involved all had a different idea of what 'created by' meant, and they're all dead now, so it's never going to get settled.

Stan Lee was always happy to give Steve Ditko his dues as co-creator, but held firm to his half of that credit, sticking to his claim that he'd had the original idea of a man with the powers of a spider, and that had to count for something.

Ditko, who always liked to see in black and white, was equally clear - he'd come up with everything you'd really associate with Spider-Man, and while Stan might have provided some small part ofthe inspiration, he could hardly be called a co-creator.

(And somewhere in a comic heaven, Kirby is putting down his cigar and pencils and getting his dukes in, making sure everybody knows he had some say in the design.)

They could never agree on who was the creator, because they had a different definition of what a creator was, and they were completely incompatible. They were both utterly right, and both utterly wrong. It's a heck of a contradiction to hang on the real life origin of Spider-Man, but everybody knows that old Webhead has proven amazingly resilient.
Posted by Bob Temuka at 3:22 PM