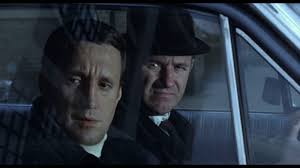 There's a terrific bit in last year's Friedkin Uncut documentary, where the legendary director is talking about a scene he shot in The French Connection, and how somebody pointed out that the camera crew had accidentally been caught in the reflection of a car window, and that he was told they might have to shoot it again in some way that would avoid that reflection, and Billy Friedkin - who knows a thing or two about movies - said there was no need to redo it, because anybody who got hung up on how the faintest of reflections shattered their suspension of disbelief were not fully engaging with his movie, so who gives a shit about that?

If he tried to pull that today, Billy would undoubtedly be slammed as "lazy" and "incompetent", but he's still 100% right. If your enjoyment of the French Connection - including one of the objectively greatest car chases ever - is destroyed by a reflection, you're not really watching his movie, and he doesn't need to cater to you.
Posted by Bob Temuka at 12:11 PM