That was Milo's Week 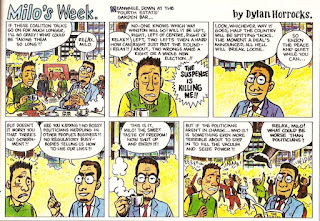 We live in the golden era of comic reprints, where the most obscure stuff from a century ago can get lavishly restored and republished, but there is still an ache for the things we can never have. Comics with complicated rights that never get untangled, or are so obscure nobody even remembers they exist any more.

And some things have such a specific audience that they'll never return a profit for anybody who ever published it. And if they ever put out a collection of the 'Milo's Week' comic strip by Dylan Horrocks, they'd probably sell one copy, and I would gladly be that one.

A lot of Horrocks comics have been reprinted, even a tonne of his incomplete work was reprinted in a book called Incomplete Works, but nobody is expecting any Milo's Week. It ran for a couple of years in the mid 90s in the Listener, a local TV listing magazine that somehow became a political juggernaut (and then got sucked into the mediocrity of baby boomer fears).

In a rare moment of editorial adventurousness for that magazine, they paid Horrocks to do comics and they were sharp as fuck, while also being genuinely funny and mixing real-life politics with surreal slapstick - the invisible hand of the market comes in and fucks everything up for everyone, while a Mr Wallace Footroot makes an appearance

Horrocks talks a lot more about it here, and even with the abrupt way the strip ended, it's obvious there is still some fondness for the whole endeavor there.

But it's created for such a specific audience, for people who were politically aware at an exact point in New Zealand's government and dig comic strips overloaded with political satire. Hell, who knows. Maybe they'd sell three copies.