The Thor crossover that broke me 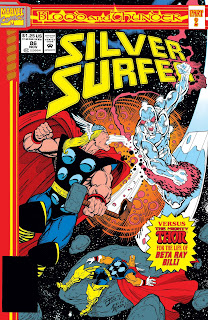 It was a good year, just after I left school and started making money in my first job, that I'd get every single superhero comic I could get my hands on. This was the early 90s, and there was no comic shop for miles and miles, so I would take what I could get.

Whatever showed up on the shelves of the corner dairies and bookshops. It didn't matter if they were deeply average DeFalco/Ryan Fantastic Four comics, or Dan Jurgens Justice League, I got the lot.

And then I got a car and out of the area, and could get lots of comics from lots of different places, and I could get picky. I was also right at the age to fall hard for independent and alternative comics, and suddenly it didn't feel like I had to get every single issue of the post-Crisis Superman books after all.

And then there was this one Silver Surfer comic, and it just fuckin' broke me, and it was right then that I gave up almost every regular superhero comic I was getting..

I'd been getting the title for a couple of years, enamored by the endlessly shining arse of Ron Lim's Norrin Rad, but that was the last new Silver Surfer comic I ever bought. I don't know what it was about that one, I don't know why it stuck in my mind, but I still have that disappointment that I spent $3.95 in 1992 money on this shit

I can't remember a single thing about the actual comic, it was so forgettable. Some sort of crossover with Thor at his most mediocre. I do remember there was no Ron Lim art on the inside, just that teasing cover, but I couldn't tell you a single other thing about this issue.

I'm not a monster, I didn't give up on superheroes altogether. I just only get one or two at a time now, I'm not trying to get 60 a month. I never came close to getting that much, but there was a while there where I would get anything, and really try to get anything I could.

It didn't last forever, but nothing does, let alone Thor crossovers.