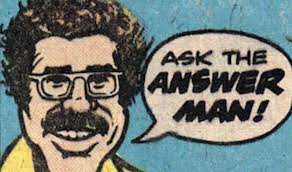 I haven't really interacted with the local Facebook groups that have a focus on comics, because, well, fuck Facebook, (although the fact that they're often full of a lot of people who get very excited about Carnage comics probably doesn't help).

But I do get a kick out of checking in on them every now and then for a slightly weird reason - they remind me a lot of the 'Ask The Answer Man' segments that ran in DC comics 40-something years ago.

Bob Rozakis used to do this column on the DC hype page, and the questions were what you usually expect, with Bob fielding a lot of questions about the first appearance of the Royal Flush Gang or what jewel kryptonite does to Superman.

But my favourite part in these columns, in these ancient comics, is the little dude who excitedly writes in to ask what Steel #3 is worth, and gets told it's worth about 25c. There's obviously no reply to the answer, but it's so easy to imagine the heartbreak on the other end, where the kid finds out the comic he'd swapped with his big brother for half a dozen candy bars wasn't a high value collectors item like he'd been promised.

Absolutely nobody has learned absolutely anything in all the years since, because that desperation is still there today in those Facebook groups, with people hoping the ragged ass copy of Marvel Premiere #14 is worth something, even though it looks like it's been used as Jabba The Hutt's sweat rag, and then they get told it's worth $1.

Every so often, someone actually has something worth something, and is rightly chuffed. But that's always a rarity, and the answer is almost always a disappointment. It's absolutely glorious.