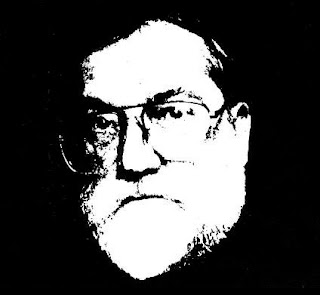 After recently reading old issues of The Comic Journal and soaking up the details of decades-old feuds that mean jack shit to anybody now, I'm struck by a familiar issue - I still can not figure out if Kenneth Smith was a legitimate and sincere writer of columns about the human condition, or just some mad joke that Gary Groth was playing on everybody.

I've read almost every word of those magazines, including many about comics that I have no interest in reading, and I truly tried to read some of Smith's incredibly verbose articles about modern society and philosophy, but never made it more than a paragraph or two before completely losing what he is on about.

I know he's a real person who has done some stunning fantasy art, but was his column a joke? Was it just the biggest and most ambitious troll of its time? Was Smith trying to explain his ideas in the most idiosyncratic form possible, just to annoy anybody who actually tried to read them? Do they make sense?

Fuck knows, but it's so much more fun to wonder about than actually trying to read the fucking things.