Monsters in the night 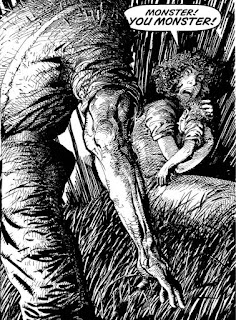 Reading Barry Windsor-Smith's gigantic Monsters comic in one go at 3am in the morning is a very, very thick experience. I heartily recommend to everybody.

Other people who are much smarter than me might say that it's such a dense book, packed full of sharp art and detailed story, that it requires serious attention. The creator himself says you'd be out of your mind to read it all in one go, because there is no way to absorb everything it's trying to tell you.

But with a dense slab of complicated comic, sometimes you just wanna bite the fucking bullet, man. Get into it.

It certainly makes it easier to deal with the jarring changes of tone as Windsor-Smith came back and forth on the project over the many, many years. You can see the marks where he wiped out Hulk references while keeping the skeleton of the story intact, and his entire style goes through some fairly significant evolution when he's off on some massive digression from the main plot, so that when he comes back to it, it's easier to work out who is who.

So you miss a lot of the details by taking it all on in one go, but that doesn't mean the basic structure of the story isn't easy enough to follow. The book highlights mood over events and a lot of it isn't that surprising - the Nazis are once again the baddest fucks of all time, although the main Nazi fuck in this book is a particularly calculating individual.

I am certain that it will reward coming back to it, in a year or so, but just to have consumed such a huge book - in ever sense of the word - in one go feels something like an accomplishment. Nothing like the thirty-something years Windsor-Smith put into this book, but we can't all be mad mod artist gods.