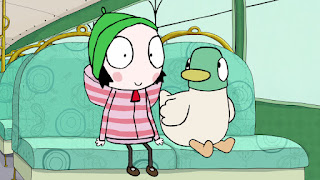 The two kids don't stand a chance, not with a dad like me. Of course they're going to be complete dorks. It's in the genes. And even without that, I'm still going to give them a lifetime of opportunities to get their geek on.

There have already been small touches - the oldest, who turns two today, has already outgrown her first Spider-Man t-shirt, but still has a weird obsession with the foot-tall plastic Batman that's been standing for justice in my bedroom for the past decade. My pal Nik gave her a plastic Superman, who may have gained more affection lately, but Bruce Wayne will always be her first choice.

She's got her own books and can read what she wants. But if she ever wants to read any kind of comic, I've got something to share with her. She literally tore into the first comics I ever got her, which might seem painful to some comic nerds, but I consider it a Very Good Start.

And if she doesn't read any of my stuff, I'm more than cool with that. Let her find her own way. As long as she's passionate about something,  I don't care what it is. Some cartoon that hasn't been invented yet. Riding ponies. Coronation Street. It doesn't matter as long as she cares about something. (As long as it's not, y'know, putting out cigarettes on cats or something. That would be unfortunate.)

Because a life when you don't get excited about the dumbest shit is a life hardly worth living, and I want to give the kids the best life that they can get.

The youngest is only two and a bit months old, and has just got the hang of focusing on single objects at a time. I don't know if he's a Batman baby or a Superman baby. We'll find out.

Happy birthday Evie! Sorry your dad is such a dork.