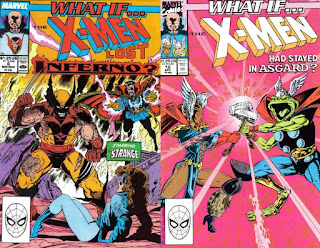 They looked like generic and safe superhero comics, but the What If comics Marvel published in the late eighties could get properly horrific. Even something like the relatively harmless Atlantis Attacks storyline had a nasty-as-shit ending if the heroes failed, with the whole world turned into mindless reptiles, and the sight of the Marvel Universe's greatest female heroes getting eaten alive by their snake god offspring.

I've always been a fan of the What If format, but have only held onto a few issues. There's the one in the original series where Daredevil gets a happy ending, and the one that was a joke issue (I'm a sucker for the joke.) And there's these two X-Men stories from the early 90s.

The Inferno issue is about as dark as it gets, once you've got a demonic Wolverine openly eating babies, it's hard to top that. But the Asgard one shows that you don't have to go completely grim if a different path is taken. There is still tragedy if many of the X-Men characters stayed behind in Odin's realm, but no more than the regular universe. It isn't a 'everything gone wrong!' storyline, it's just 'everything went a bit different!'.

Because the best alternate realities stories can show a different path, they don't have to  blow the whole path up as they go.