The Last Box of Marvel: Weird in space 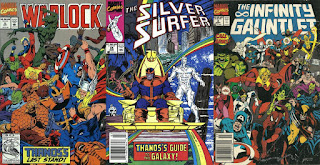 I was properly freaked out as a kid by the clowns building the pile of trash and diamonds in those 70s Warlock comics, and absolutely obsessed with the Infinity Gauntlet when it suddenly appeared in one of my local bookstores a decade later - I hadn't heard a thing about it, didn't understand what the hell was going on, but Perez's art was gorgeous and the unsettling tone it set, right from the start, was addictive.

Now I've only got a tiny amount of Starlin's Captain Marvel and hardly any of the Thanos stuff past 2000, but I've still got the Infinity Gauntlet issues that I picked up off the shelves as they came out, and the 1990s reprints of his Warlock comics on the nice paper, and almost all of the Silver Surfer comics.

Starlin did get diminishing returns from his cosmic stuff - the later Infinity series quickly spiraled into mediocrity but once upon a time, nobody else could match him for taking science fiction concepts and somehow making them deeply creepy. Space wasn't just a place full of starships and empires and lasers, it was a place of altered states of consciousness and absurdity and hardcore surrealism, with madness among the stars, (see also his various Dreadstar comics)

It all got a bit stale and repetitive around the time Starlin's work really started to gain a mass audience, but there is plenty of weirdness in his part of the universe, and he would show it all.