The Last Box of Marvel: When the weirdos crash the House of Ideas 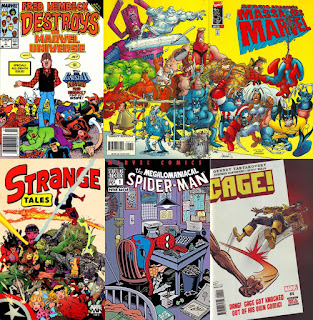 Marvel can produce its own satire comics in-house, but when the weirdos crash the place, and get a chance to play with the toys, the results are usually relatively sedate, while still being lots of fun.  Hembeck's few chances to go crazy with a full issue are to be relished, and the one where he slaughters everybody is a gold mine of bad puns and excellent sight gags. Likewise, there is no harm in letting Sergio Aragones Massacre Marvel, because they're more Sergio comics than Marvel comics, and he can do anything he likes, because it's always brilliant.

The Strange Tales issues from a few years back mostly aren't the usual joke comics by the usual band of idiots, but talents from outside the regular superhero grind. A lot of the stories do fall into a familiar rut, with endless 'this is an absurd idea, but kinda fun' riffs, and if you didn't know that most superhero stories are a pointless waste of time, you'll know of it after a couple of these slightly strange tales.

Petr Bagge's Spider-Man comic was the best in this vein. His one-shot Meglomanical Spider-Man comic turns Peter Parker into a fully obnoxious rational libertarian, following Ditko all the way down that Rand hole, and is genuinely one of the funniest and sweetest comics Marvel has ever produced.

The funniest Marvel comic in recent years might be the Cage comic that Genndy Tartakovsky finally did. Loaded with gags and a tone that starts out over the top and then goes several levels higher, it was also infused for a genuine affection for the character and premise, as well as some terrifically kickass action art.

None of these comics ever come close to being in continuity and stand on their own a lot better than any Dark Avengers comic from 2008. When the weirdos crash this house of ideas, they leave behind something timeless.