The Last Box of Marvel: Of a certain Age 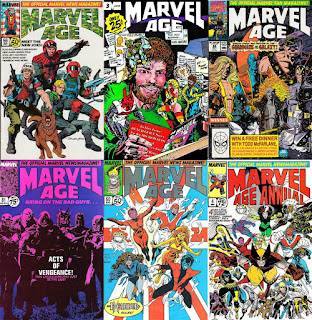 I've still got several Marvel Age comics that were read so much over years that they're only held together by my own nostalgia. And while they are pure marketing material, they also have actual value in their own right.

When I was at Peak Marvel, there was no internet - not as we know it - so finding an issue of Marvel Age was always something, because it was absolutely jammed with news and background material. It wasn't the sort of thing that would talk about talent getting butt-fucked on their page rate, or where you'd see any discussion of Kirby's difficulty to getting his bloody art back, but if you wanted to know who the background characters in the last issue of GI Joe was, or what's going on in the New Universe, or Sue Richard's new haircut, Marvel Age had everything you needed.

You also had some guaranteed couple of pages of Hembeck every month, and every now and then you'd get a super passive-aggressive open letter from Jim Shooter, having a dig at Dick Giordano for not calling him back or some shit.

And, best of all, old issues of Marvel Age have art that never appears anywhere else, including copious behind the scenes sketches and unused covers. Occasionally they get their hottest artists  to do unique pages of comics which are 97% hype, but  that doesn't mean they can't be beautiful.

It's a fucking fine line, posing as hype-man to a bunch of fairly average comic books, but Marvel Age just about stayed just on the right side of it.