The Last Box of Marvel: She-Hulk can see you 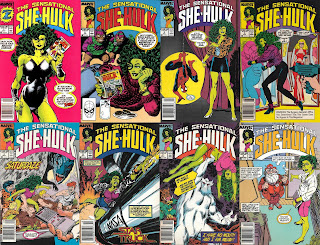 The first eight issues of John Byrne's She-Hulk are my absolute favourite John Byrne comics, because they're stripped of any self importance, and are not trying to be epic or crucial, just fun. Jennifer Walters was always giving Byrne crap for messing up her life, but she was also a well-rounded character, with a personal life and career that went further than beating up the Abomination. She would be going into the office and chilling out in front of the TV and house-sitting her rich friend's apartment and living a real life.

The meta-jokes have been done to death by now - and were already a bit stale by the time Byrne returned to the comic - but there is still a kick in the way characters rip through the page, and take a shortcut through the comic book listing ads, full of dozens of tiny jokes that give the reader real value for money.

But the real highlight was really She-Hulk's chunky sweaters. She just looked great in those.