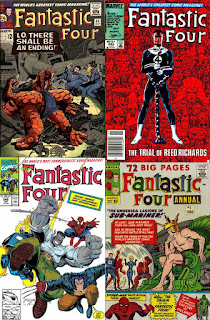 When I was very, very young, we visited some distant relatives, and one of them was a third cousin or something who had an astonishing collection of Fantastic Four comics. He'd been getting them regularly for years, and had dozens and dozens of FFs. I never saw that collection again, but that thrill of seeing all those super colourful covers is imprinted on my head.

That's the closest I've ever really come into any kind of connection to the World's Greatest Comics Magazine.  Despite this early entry into the world of Reed, Sue, Johnny and Ben, the FF always felt a little flavourless, compared to the complexities of the X-Men or the balls-out action of the Avengers.

The early Kirby issues were never available, and every issue I tried seemed to be too overawed by that original vision to do anything new with it.

Still, now I've read all the lee/Kirby work, and even have a few of my own - five issues between  43 and 74, the first annual with Namor going full Namor, and reprints of the first issue and the third annual with the wedding - and I can easily see what all the fuss was about, because those are as good as superhero comics get.

But after that, the only Fantastic Four comics I have are The Trial Of Reed Richards comics and the annual with the evil milk from the Byrne era; and the New Fantastic Four comics by Simonson/Adams. (I need to carve out an Art Adams section, because he seems to be the sole reason I hold onto a lot of comics).

A little of the fantastic goes a long way.