The Last Box Of Marvel: The ones that don't fit 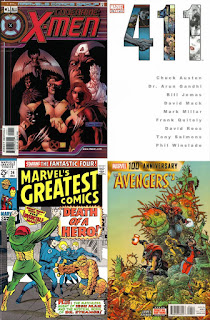 Up there on the bookshelves, there's all the Ennis Punisher; and all of the Claremont and Bendis and Morrison X-men; and things like The Ultimates and Marvels and three Elektra books and the first Marshall Law and the first Avengers comics, but that's just about everything in the last box of Marvel.

There's a few things that don't fit into any other category, like the issue of 411 with the Millar/Quiteley gem, or the bonkers Avengers 100th Anniversary comic by James Stokoe, or the lovely Captain America/Thor comic from some FCBD years ago, or a few issues of the ultra-weird 'What would Marvel Comic looks like in the Marvel Universe?' things that they put out in 2000, including the X-Men one which is the most Mark Millar comic Mark Millar ever created.

And there's a few more reprints, including a couple of issues of the Marvel's Greatest Comics title, which offered the best value for money with a-grade FF, Iron Man, Captain America and Doctor Strange.

But that's it, that's the last box of Marvel. I'll add to it slowly, and take some away just as slowly, and it's stablised as one banana box's worth of comic Marvels.

Now I just have to get the Two Last Boxes of DC down to one...