The Last Box of Marvel: Action is my reward 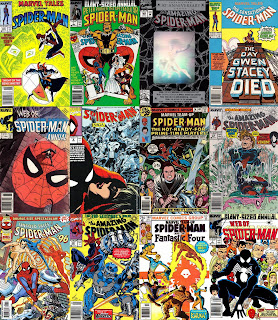 Spidey used to be my guy, and I had hundreds of Spider-Man comics. I always liked the way he would just get knocked down again and again, and would always get up again with a dumb quip, ready to go. The world would take a giant crap on him, nobody would respect him, but he was the dude who would always be there when he needed to be.
But it's a familiar feeling in this last box of Marvel as I find there's just been so much Spider-Man comics published in the past 50 years, and that I only need a relative few to get my web-head fix.
So I still have some things like the Spider-Man Saga comic I painstakingly put all lawn-mowing money into in 1991, which is still excellent reference material for the vast sweep of Spidey history up to that point, and the third Web of Spider-Man annual with the big friendly pin-ups of all of Spidey's old-school friends and foes (the second annual is also in there because it's Art Adams doing a 1980s annual, and I'll always have a weakness for Adams annuals).
And with the fantastic perfection of the Claremont/Byrne Marvel Team-Up comics collected on the bookshelf, I only need a couple of other issues of that series - the bonkers one where the SNL crew showed up, and #100 with the Fantastic Four and the Miller art. I've also got the terrific Bend Sinister annual with more Miller art in a Marvel Tales comic, as well as another couple of issues of that series which covers the whole Gwen Stacey/Green Goblin deaths thing.
I've still got all the Spider_man comics that tied into the Inferno crossover, because Inferno was the greatest Marvel crossover ever, and a few of the McFarlane ones from immediately afterwards, because that's when his art peaked for me, and it feels like the last time really tried to impress, while actually having the chops for it.
There's also the one issue of Spider-Ma'ns Tangled Webs that Cooke did and Untold Tales of Spider-Man '96 for the sheer charming innocence of the thing, but I don't know why I've held onto Spectacular Spider-Man Annual #7 for 30+ years. I guess I'm a bigger Puma fan than I ever thought?
I've only got the first two issues of Mark Bagley's Spider-Man after selling off almost all of the 50 issues that followed it for nothing a decade ago. I could have made a fucking mint if I'd kept those Carnage issues, but I'm glad I also held onto the first issue with the hologram cover, because hologram covers get me so excited.
There are many other great Spider-Man comics, and many others that I enjoy reading. I still keep up with the latest stories through the library, but the relative few that have survived all the purges scratch that itch that feels like a radioactive spider bite.