The Last Box Of Marvel: Kicking in high heels 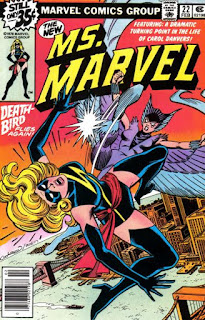 Ms Marvel #22 is, as far as I can recall, the earliest comic issue I ever remember reading, and a lot of my love for all things comic book can be traced back to reading this exact comic while sitting in the spare bedroom on a hot Sunday afternoon at my Aunty Val's place when I was five.

(Well, it was either this, or motherfuckin' Captain Sunshine. They both date from the exact same time.)

A lot of my love for comics can also be explained by the fact that Ms Marvel #22 - the penultimate comic in the series - has two beautiful and strong women in high heels kicking the crap out of each other. This made an impression.

I forgot all about this for years and years until I found a copy in a grotty second hand bookstore a hundred miles away, and realised every single panel had been imprinted on my brain, even though I'd forgotten it even existed. This is primal comics.

There's other random issues of Power Man and Iron Fist (#75) and Marvel Two In One (#96) that I still held on to since I first started really collecting comics, and they've held up pretty well over the years. They're not going anywhere. And Ms Marvel is forever.