Like a lot of teenagers who wear too much black and brood too much about death, I had a fling with nihilism as a lifestyle choice. This belief in nothing was fun while it lasted, but only lasted about a week.

And like a lot of teenagers who wore too much black and spent too much time reading Marvel comic books, the first time I ever actually heard of the concept of nihilism was in a comic about Jim Starlin’s Thanos. And a love of this character has lasted a lot longer than a week. 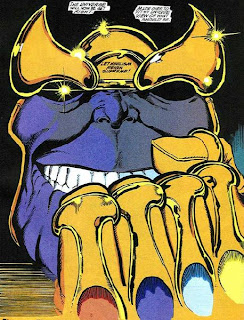 I can not overstate how much I was blown away by Infinity Gauntlet #1 when it suddenly showed up on the comic shelf at Temuka Stationery in 1991, nestled between the expected issues of the deluxe Marvel Handbook and the Savage Sword of Conan.

A lot of that powerful impact was due to the fact that I’d never even heard of it, and had no idea it was coming. I was vaguely familiar with Warlock and Thanos from the few issues of the old seventies stuff I had seen, (and, somewhat ironically, their Marvel Handbook entries, usually in the ‘Book of the Dead’ section), but hadn’t been reading the Silver Surfer comic since the first couple of Englehart/Rogers issues. I also had no access to comic industry magazines, and there was certainly no internet. I got most of my upcoming series news from the Bullpen Bulletins and the subscription pages, and I had no idea the Infinity Gauntlet even existed until I saw #1..

But even though I knew nothing about, and even though it cost twice as much as a regular comic, I fell hard for the Infinity Gauntlet. There was something unusually moody in George Perez’s art, and Jim Starlin’s script skated a deft line between intense introspection and events on an unimaginably cosmic scale.

My tastes were a little less refined at this stage of my comic reading life – I’d never read any Crumb or Spiegelman or Clowes, and I still hadn’t even read Sandman or Watchmen. But the storytelling in the Infinity Gauntlet was so perfect, and full of such epic despair and larger-than-life characters.

Especially when it came to its main character, because this comic shows Thanos at his glorious, monstrous best. 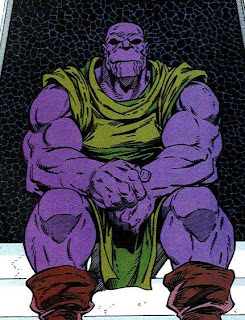 After all, this is a character who wipes out half of all life in the universe with a snap of the fingers and a sly grin in Infinity Gauntlet #1. Using a scientist’s dedication and an artist’s improvisation, he has clawed his way to the very top of all things – as the absolute ruler of all reality, Thanos shows no remorse or pity as he bends the universe to his will.

Thanos is one of the great Marvel villains. He has the dispassionate cruelty of the Red Skull, the powerful and justified arrogance of Doctor Doom and Magneto’s unwillingness to fit neatly inside any ‘hero’ or ‘villain’ box. But while he shares these traits – and while he may be a thinly-veiled counterpart to Jack Kirby’s mighty Darkseid – Thanos is a unique character.

Because, unlike these other megalomaniacs, Thanos is not a personality built around a vivid design. While he often appears appropriately menacing, he still has a pretty goofy look – a stubbly chin is Marvel Generic Alien Feature #4 – and his blue and gold outfit is an absolutely average 1970s costume.

Thanos’ charms aren’t in his looks, it’s in his smarts, in the way he is a bit more clever and devious than anybody else seeking to stop him. In the Gauntlet prelude series Thanos Quest – which I only finally got to read last month when Marvel put out a welcomed reprint – he beats the oldest beings in the universe with guile and sophistication. He identifies a source of untapped power, and nothing in the universe can stop him from getting there.

He’s also quite polite and his brutal honesty is often funny. He wouldn’t destroy you if you had nothing to do with him, unless it suited his purpose, and then he’d wipe out all of existence, without a second thought. 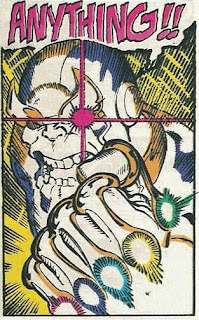 (There is a solar eclipse happening right now outside, as I write these words. The light is ALL WRONG, with dark blue skies and sharp shadows on everything. It’s weirdly fitting to be thinking about Thanos in these circumstances.)

Despite his (well-earned) reputation as the ultimate nihilist, Thanos does always have goals, and always believes in something, even if it is just his own superiority. He is a big softie at heart, literally in love with Death, and willing to do anything for a female anthropomorphic representation of her.

And when he couldn’t please her, Thanos moved on. His life has become dedicated to the collection of knowledge – something that would certainly be a worthy goal if innocent people didn’t keep getting mowed down in his quest.

The fact that Thanos usually has clear and concise goals is impressive enough, but he also manages to actually achieve them. He does climb to the top of reality and becomes the supreme being. Of course, the great dichotomy of Thanos is that he craves ultimate power, and is good enough to attain it over and over again, only to lose it, usually due to his own actions.

This is what keeps him from ever being a total hero or villain – Thanos is always his own worst enemy. 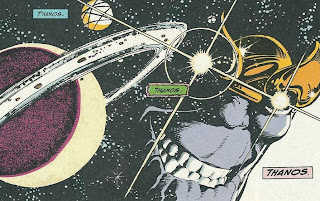 The appearance of Thanos in the credits of The Avengers was a good sign that the film series was taking off into a cosmic arena, which has always been one of Marvel comic’s core strengths. Out there, among the stars, there have been some wonderful Marvel stories – doses of brilliance in the Guardians of The Galaxy or Silver Surfer or Warlock.

Still, I’d be surprised if 10 per cent of the people who saw The Avengers recognised the character (although there is a good 20 per cent who will claim they did recognise him all along, after some quick wiki-work). A two-second glimpse in a big Hollywood blockbuster exposed the character to a bigger audience than 40 years of comics.

That kind of attention is bound to mess up the character somehow. It always does. But I don’t mind, because I got mine. The most obvious benefit to me from all this renewed attention is that I finally got that Thanos Quest comic, which I’ve been after ever since I read the first issue of the Infinity Gauntlet, all those years ago, and had no fucking idea what was going on, but knew I wanted more.

And even though that obsession with all things Thanos died out two issues into the Infinity War, I always look forward to more Thanos comics. A bit of nihilism can be all right, in small doses.
Posted by Bob Temuka at 11:27 PM