I hate you, Captain Sunshine

Last week I bought a comic that I hate so much it makes me want to cry.

It's not a modern comic, and this is none of your modern hate, built on irony or nostalgia or 21st-century sensibilities. This is primal loathing – hatred of this comic is written deep in my comic-loving DNA.

I hate you so much, The Adventures Of Captain Sunshine.

Which is a shame, because it really isn't as bad as that loathing suggests, and the thing I hate most about it also has a spectacular pay-off. 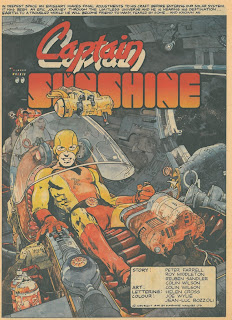 I've talked about this comic before. It's nothing to do with the Venture Bros character. It's a New Zealand comic published in 1979, designed to promote a wristwatch sundial, an idea that is exactly as stupid as it sounds. It was written by Peter Farrell, Roy Middleton, Reuben Sandler, and Colin Wilson. Wilson also did the art for the comic, and the talent that would take him on to greater heights in Europe is still there, if a little clumsy.

It's about some space arsehole who comes to earth to beat up men with moustaches and lecture the rest of us about the harm we're doing to Mother Earth. I think. I never really could follow it.


There were tens of thousands of these comics published, and a promised second issue never happened, with stories of a warehouse full of Captain Sunshine crap persisting for years. There were still copies of Captain Sunshine spread all over the country, choking bookshop shelves, and eventually flooding out onto the second hand market. 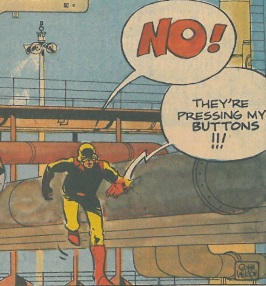 I hated, hated, hated Captain Sunshine when I was a kid. My first distinct comic memory is hating it. I hated the boring plot, and the clumsy dialogue, and the stupid characters and the way it was everywhere and I never wanted it, and I hated how cheap it looked with its tatty paper cover, compared to the glossy things on the front of American comics. (2000ad and other British weeklies always overcome the bog-paper cover limitations with some astonishingly strong cover design work, which Sunshine certainly didn't have.)

I despised Captain Sunshine so much, that I completely blocked it out of my mind, and forgot it even existed for a good few decades, until I saw some art from it at an exhibition in Wellington nearly three years ago, and suddenly remembered how much I hated it.

Even though I am a massive fan of Colin Wilson's artwork, and am always pleased to see it pop up again, I saw his art for the first couple of pages of Captain Sunshine, and the memory was so bad, I could remember drinking horrible orange cordial at my auntie and uncle's place, one sunny morning in 1980.

It was properly stunning, and my surprise at this long-repressed memory almost overcame the other feeling I had – an intense loathing for this comic, that still makes me mad today.

I kept seeing it for sale on the internet, with copies usually changing hands for about ten bucks. But I was never tempted, until I saw it in a second hand bookshop in Auckland's beautiful Onehunga last Saturday, on sale for two dollars. Even though it made me want to spit when I picked it up, I had to see if I really did still hate it that much, and I had to see what was so bad about the whole thing. Look at it with the modern eye.

And the first answer was yes – I really do still hate it that much. I loathe the main character, the comic's pissy portentousness and the flat, dead dialogue. I hate the way one of the main secondary characters looks a lot like one of the Guardians of the Universe from Green Lantern, and I always fucking hated the Guardians of the Universe. I hate it when Captain Sunshine yells out 'LET'S DO IT THEN!' really loud when they come up with a plan. I hate the pretentious-as-fuck History Of The Universe section in the first two pages, because it's the same pretentious-as-fuck History of the Universe section that always showed up in seventies sci-fi comics.

But most of all, I hate the colouring. Oh, I hate it so damn much. 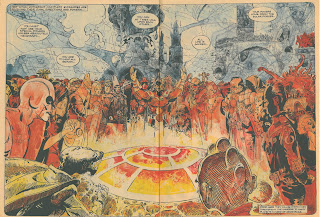 No wonder I associate this comic with toxic orange cordial, because it looks like they used orange cordial to colour this thing. Either that, or they used some high-quality felt-tip pens to fill in-between the lines.

It's splotchy as hell, and all faded oranges and yellows and reds. Captain Sunshine's uniform is, notably, just a sea of yellow and orange. It makes it one of the most repellent comics I've ever read.

They were going for some kind of groovy seventies effect, as if the world within the comic was being lit by lava lamps. But it's all washed out and wimpy, and besides, lava lamps make me feel sick too.

The colours do get better as it gets going, becoming clearer and far more palatable, but the first half dozen pages are just nasty.

But what I didn't remember about the comic until I actually read the damn thing again was that all this dusty colouring actually pays off, when the title character jumps into the sea to talk to some whales, and there is a two-page spread of vivid blues that suddenly bring some life to these pages: 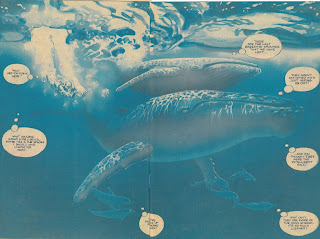 It's the one moment of genuine artistic merit in this wretched comic, some real serenity in the cheap and clumsy chaos.

And I also can't fault the comic for its ambitions- there is a blatant environmental message in this 1970s comic. It's not much more than 'SAVE THE WHALES', but it's so earnest and awkward that it's actually kinda charming. And you can't really blame the creators for attempting to putting something with a message into a tie-in comic for an idiotic wristwatch.

And I do appreciate Wilson's art in the comic, even though it's not much, and it's far from his best. Moebius comics always freaked me out a little, but I somehow found Moebius followers even weirder, and this is about as far out as early Wilson gets. 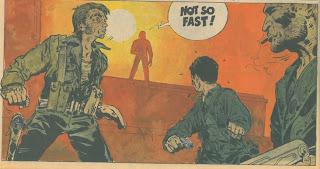 I once hated it partly because it was everywhere and his easy availability offended my adolescent sensibilities, when I was going crazy trying to find issues of more important comics like Scream and Sergent Rock. It's a comic I always associated with shitty bookshops in shitty holiday towns. Sometimes, all I wanted was a Superman, and all they would have is Captain bloody Sunshine.

I'm over that now, because it's a proper slice of history, and it is a bit rarer, and my views on NZ comics are a lot more mature.

But every time I glance at the cover of The Adventures of Captain Sunshine, I feel a bit sick and angry and I hate it so much I want to cry. I'm fairly astonished that a few flimsy paper of cheap newsprint can still have that kind of an effect on me, but that doesn't actually make me feel any better, so I'm gonna go hide that comic in the bottom of a box somewhere, and get it out of my sight for a few more years. 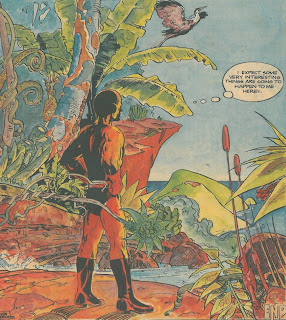 He's came to save us all, but Captain Sunshine can fuck right off.
Posted by Bob Temuka at 6:48 PM

Ha ha! Great review! Though I bought multiple copies of the comic back in the day (when I was 9) and must have owned 3 or 4 versions of the watch (which kept breaking). Man I loved that watch.

Anyway, I remember finding the story a bit difficult and that I couldn't get into it very much, which I think I just found more baffling than anything else. I do remember being disappointed there wasn't a second comic though. I bought enough of those damn watches to keep the company afloat singlehandedly.

The thing is, to a 9 year old, it was just about right. The eco message, the wet background story. Mostly it jelled pretty well for me at that age. As an adult, I totally agree with many of your criticisms, but I think that the 9 year old me would have just told you to stop being such an whiney teenage jackass. ;-)