Up the Ruling Class 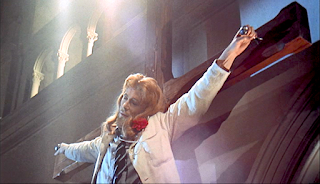 I swear, literally a day after I've randomly seen The Ruling Class while comforting the baby at 4am, I see a list of Grant Morrison's favourite films made when they were a young, hungry writer and there it is, at number three on their list.

It just happened to be starting on the movie channel when I was looking for something to watch, I'd literally never heard of it before that day, and it was all right. It turned out to be an extremely shrill and loud movie about how fucked the upper classes are, which isn't exactly earth-shattering news.

But it's no wonder it's a Morrison fave, it pulls no punches and is scathing in its portrayal of these posh pricks, gets in some demented imagery and stops every now and again for a song and dance. It's a film that is just happily obnoxious about the cunts who run the world, and I don't think I'll ever need to watch it ever again. Sorry Grant, once was enough for me.