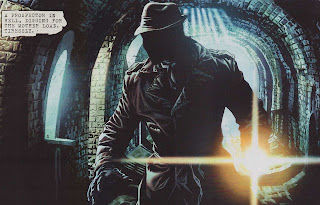 There is a mindset at all the big comic book publishers that would be incredibly funny if it wasn't so dumb and short-sighted, and you can see it in their absolute fear that they're not squeezing every cent they can get out of something they own, even as they destroy any sustainability it might have

The last time I ever tried to engage with this dumbass argument was when the Before Watchmen project was announced, and a long-time online buddy tried to convince me that it was a sound business move, that DC were right to try and get more out of the thing, because they were just leaving money on the table by not pursuing all opportunities to use these characters and concepts.

But it's always been such a bullshit argument, especially with something like Watchmen, because its fearful symmetry was a huge part of its appeal, the delicate balance of the story mirrored in precise artwork. It existed as one 12-chapter story that never needed any prequels, sequels or spin-offs. It was good as it was.

Now, it is surrounded by Before Watchmen books - which would be utterly worthless if they didn't occasionally look real fucking pretty - or new spin-offs, or even ones where Superman gets to throw a punch at Dr Manhattan for several thousand panels. Maybe they need to get the

As always, Marvel did it too, on a far grander scale with the X-men. It was once indisputably the top superhero comic in the world, and they pissed all that away on endless spin-offs. The sheer amount of stuff puts anyone off from starting in the first place, while driving away those who can't get up with the financial pace.

It's some basic business sense - don't fuck up the golden goose - but the big comics publishers are often baffled by that entire metaphor.

With Watchmen, the original work is always going to be an original work and is still available in one handy volume, but the symmetry that made it so attractive in the first place is now lop-sided by dreck, and all that money on the table can just slide right off the edges, and onto the floor.