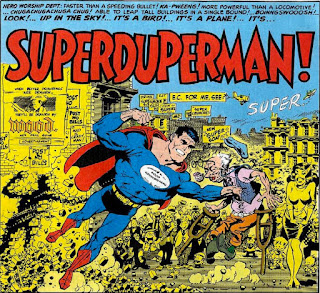 The 1980s were a great wave of revisionist superhero comics, and they were a much-needed sudden shock to the mainstream system that was still dealing with the collapse of the newsstand market, and a renewed push into specialty stores and general bookshops. All the big superheroes had their dark night of the soul to deal with and it was already played out by the early 90s, any attempts already choking on their own irony.

It was an age of revisionism and like any ages, it's debatable where it starts. Was it with Alan Moore coming over from the UK with his mad ideas? Was it when Miller grabbed hold of Daredevil by the horns and took the Man Without Fear to new depths? Were the seeds there in Gerber's deeply ironic 70s work at the House of Ideas?

Or was this age born much earlier than that, taking some time to simmer? Because it was all there in the pages of Mad #4 in 1953, and the adventures of Superduperman by Harvey Kurtzman and Wally Wood.

All the great creators of the 80s - both artists and writers - grew up on the brilliance of the early Mad comics. Any of the British creators that came over in the first wave still maintain that comics never got better than the first two dozen issues of Mad, and it's genuinely arguable that they're right. They're so slick and polished and never patronized their audience.

And Supderduperman ripped into some heavy duty deconstruction of the super-hero in the name of laffs, filling every panel with meaning and the kind of violence that the 'real' superheroes never showed.

And it was all seeping into young brains, showing what comics could really do. Thirty years later they were making the same jokes, just cloaked in seriousness and pastiche. Because when you looking for the start of a particular era, you always gotta go back to when everyone were kids.