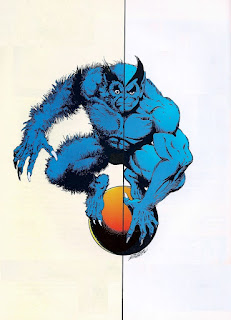 Beast is one of best characters Marvel ever had, an acrobatic and erudite blue furred force of nature, bouncing around the walls while arguing about highbrow theories and pop philosophy. We couldn't have that, so he's been consistently fucked over by decades of creators into being a nasty piece of shit.

Apart from the odd ironic effort, he hasn't been that kind of character in years, he's mainly just been a dickhead. It's not the fault of any one writer, artist or editor, just a continuation of character over decades, with Hank McCoy making innumerable dumb decisions, and barely mentioning stars and garters.

Marvel always seems so scared of characters with real intelligence. It's why Dr Doom is surprisingly hard to get right, and why the Reed Richards of the Ultimate universe took this logic to the total conclusion and made the most intelligent man on earth the greatest monster that universe ever created. It doesn't pay to be too smart.

I've fallen way behind the avalanche of new x-comics, but I'm just far enough that I'm sure Hank McCoy has done something completely fucking moronic in the things I need to catch up on. There's beauty in the beast, but you going to have to work to find it beneath that fur.