No assembling around here 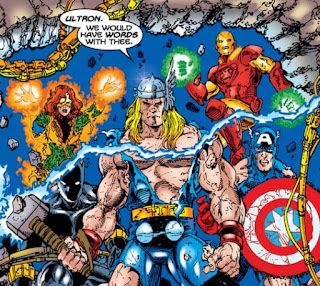 There have only been a couple of times in my adult life when I didn't live anywhere near a comic shop, or even a decent bookstore, and went months and months and months without regular injections of raw comic goodness. I knew I'd catch up eventually, but it might take a while.

The biggest comic drought as an adult was undoubtedly around the turn of the century, when I went back home for a few years, two hours drive away from the nearest comic store. I managed to keep up with the best Ennis and Morrison comics of the day, but everything else fell away. All the good stuff that came out from all the best publishers, I completely missed it all

It didn't really matter because knew I would catch up, sooner or later. Everything was getting collected, and I'd one day be in a town with all the back issues I needed. And I was, and caught up on all the Authority and Hourman comics I needed.

And yet, I never got to read the last half of that Busiek/Perez Avengers run. I got the first year and a bit's worth of issues, and got into its hardline detail, in both history and art. While I gave it up all at once when I moved town, I fully intended to come back to it.

And I just never did. Never bought the later issues, never even read any collected edition from the library. I know a lot of what happens, I know there is a big thing with Ultron and Thor has one of his most badass moments, but I never did see how it actually played out.

I'm not dead yet, so there's still time for one of Marvel Epic collections or something to put out the whole storyline, but I haven't seen it yet. It just shows me how you can miss out on something you actually like, when the opportunity never presents itself.

Sometimes, it just slips by.