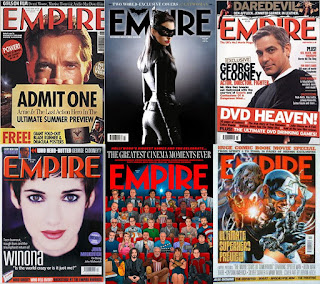 There is a significant pile of boxes in the corner of our storage unit that is full of Empire magazines. It's a hefty magazine every month, and when you've been getting every issue since 1993, it all adds up. And I'm not getting rid of them, not ever. Because I just don't trust any of the websites.

There are hundreds of issues of the British movie mag, full of the very best reviews and articles and essays and interviews, and it's all an invaluable resource of movie nerdom. I go through the whole lot every eight years or so and when I mention it to normal people they think I'm mental, because you can just go to the goddamn website on your phone any time you want.

But even if they put everything of worth from the mag onto the website - which they don't - I'm holding on to the mags, because no matte rhow much info they put up on their site, it's not going to be there forever.

No website lasts, and even magazines that have run for decades can swiftly fold and fade away, and it's not like anybody is going to keep paying to keep their significant archives online. One day, and it may come a lot sooner than anybody would like - the website can just disappear.

The hole in culture that the internet created is getting bigger, the further forward in time we go. Finding an article from the early 2000s can be incredibly difficult as it fades away.

But that stack of paper magazines are still gonna be there, that's worth taking up a little space in a storage locker.

A lot of people put there faith in the companies that host their music and comics and movies and whatever, and I think they're the mad ones, because that won't be there in 20 years. Not a chance. Paper fades, but print endures.