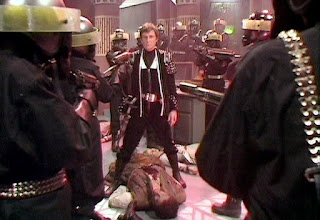 Blake's 7 was a pretty bleak show, right from the start, and right to the end. The whole programme had a profound impact on me as a kid, to the point where it would show up as a metaphor in a dream for young existentialism.. So it should have come as no surprise when it ended with the absolute slaughter of every main character, but it was still a genuinely shocking thing to witness.

I was probably six-years-old when I first saw this last episode and it did me harm.

It's not just that they all get gunned down in the final moments, it's that they haven't changed anything, with no hint their death will inspire others to rise up against the Federation. Even the figurehead they all rallied around - the title character of the whole damn show -  turned out to be another weak man, who buckled under the pressure and started working for the system.

Avon gets the last grin, but the Federation rolls on, crushing all in its path. The rebels are annihilated and the system endures. Servalan is the only main character who is still alive by the end of the series and gets to rock off into forever with her crew of mutoids.

There's been plenty of sequels in books and audio adventures, but they don't really count. While they give some hope, the utterly nihilistic end of the show is the only way this story could ever end. Even though they were onto a space trek straight into oblivion from the start, it still hurt..

I'm still a couple of years away from my next 11-year rewatch, but it's coming. As inevitable and inescapable as that bloody Federation.