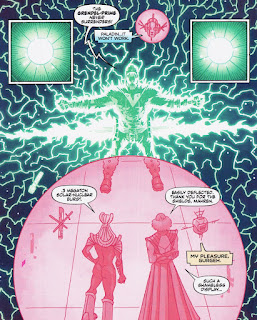 Grendel: Devil's Odyssey really felt like the end for the entire concept. Pushing even further past the future society that the devil created, taking Grendel Prime out into the wider universe and literally leaving behind a dying earth.

It was a devilishly exciting adventure out into the stars, all beautifully rendered by creator Matt Wagner. Grendel Prime, the ultimate warrior, walked the path of non violence for a while and lasered a few squid people, and beat the shit out of the bluntest political allegory Wagner has ever used (and there have been some absolute doozies in his career). It was fucking excellent.

And then Grendel reaches the end of the line and finds he's just a bit basic for intergalactic life, and gets his metallic ass sent back to earth. There's only so much that unstoppable willpower can take you, only so brutal and efficient you can be before you start to bore the piss out of higher lifeforms. The devil can only go so far.

After wrapping up Mage, Wagner's return for Devil's Odyssey felt like the best epilogue Grendel could ever hope for. Ending at the dead end that all that ruthlessness was always leading towards.

But now it turns out that wasn't the end at all. There's more coming, with Wagner obviously invigorated by this space adventure, and taking this bizarre future another indomitable step even further forward, and there's a planned 12-issue series of Grendel Prime's new quest in a new Earth where the Grendel mark is a death sentence.

With the new Netflix deal for a Grendel TV series announced last week, all the eyes will be on Hunter Rose again, and that's fine because he's going to be gorgeous, charming and deadly. But Wagner's story of this far future of humanity, where the blank stare of the Grendel is the only righteous, honorable and unstoppable force left in the world, is far more exciting.