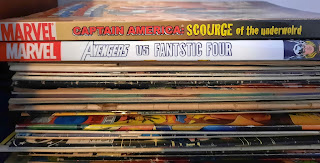 There is a lot that is weird and frustrating about following Marvel comics in trade paperback format. The constant renumbering of volumes and the thin collections make them stupidly hard to follow. No wonder they're so dead in the bookstore market, not when they can't get the absolute basics right.

I generally don't like pointing out typos, because they're usually a charming reminder that there is an fallible human hand involved somewhere in the production. But putting a typo on the spine of your book, where there are only a tiny amount of words can fit, does suggest that you really don't give a fuck.

The typo on the Scourge book is easy enough to skim by, but getting the name of the World's Greatest Comic Magazine wrong is just an appalling obvious metaphor for the whole company. If they can only be fantstic, who would you bother with them?