Shuffling back to the arrogance of the now 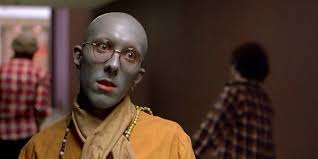 I'm still convinced that the sad pivot from shambling to running zombies was the perfect metaphor for the arrogance of the now, but that was nothing compared to the metaphor that is the whole fucking planet right now. No movie would be so blunt to have a world that we have - still suffering under a pandemic that has caused innumerable misery and harm, literally all over the globe, and the arrogance and stupidity that keeps feeding it.

It always been a cliche in horror of science fiction that the dickhead denying that something exists is killed for it in the stupidest way possible, but all cliche is rooted in truth and there are stories every day about deniers choking on their own innards. You just can't ignore that kind of monumental dumbness.

But when the simple act of wearing a mask becomes eaten up and spat out by political morons, it's clear we're still in a world where nobody thinks they're going to be part of the undead masses. They think they're the fucking hero, until they're coughing their bloody lungs up.

I just want aggressively anti-vax dipshits to get a fucking dose so we can all look back on this horrific year and judge them for the dumbass zombies they are.