Wizard did not get high 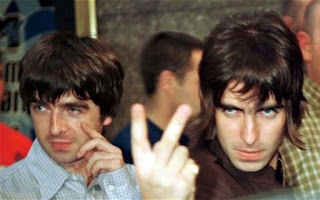 There's a part of me that is still deeply annoyed by Wizard magazine making fun of Oasis when they were both at their mid-90s peak. It's highly irrational, but it's still fucking there.

It was partly because Wizard never looked at anything beyond the surface of the lyrics of their music, but it was mainly because it was the perfect example of the puritanical geek, the good boy who spent his pocket money of new issues of Nova The Human Rocket, not going out partying and getting loaded and having a good time. (You can totally do both.) The kind of dork that was so busy judging other people, they forgot to live their own life.

It's not like the Gallaghers ever needed anybody to defend them - and they continue to give the best interviews in rock music, long after they peaked as musicians -  but sometimes you just need to put down the Wizard, go outside and meet some people.