The Bat and the Cat 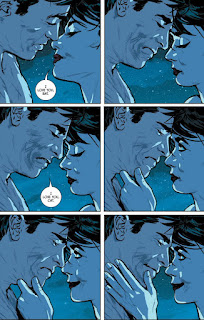 I didn't think anything in DC comics could be so annoying as when Justice Leaguers got into the habit of calling each other by their first names in public, absolutely shredding their secret identities, in some failed attempt at realism. But the way Batman and Catwoman call each other 'Bat' and 'Cat' in Tom King's comics manages to exceed even that.

It's a fucking ridiculous thing to get annoyed about - especially in this day and age, when there is plenty of other injustices to give a damn about - but I can't help it. King's Bat-comics are generally frustrating, but are also full of tiny moments of joy that are worth getting through, and then always grind to a meaningless halt when the characters unload their feelings on each other with ridiculous pet names.

It just seems so unprofessional and totally contrived - not the way hard-hitting vigilantes talk, and not the way normal people who just like each other's company talk. It's a failure of imagination, the most basic of pet names, for these most extraordinary of lovers.

Keep the Bat and Cat stuff where it belongs, between the panels an in the imagination of those who think it's big and clever.