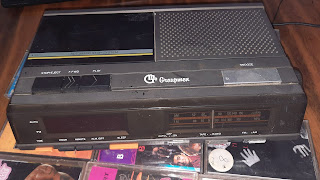 The best music I ever heard in my life came out of the tiniest speakers, on the alarm clock that woke me up every morning for school.

Like every other kid in the world ever, I was such a fucking snob about the weirdest shit, and the only entertainment that mattered to me were things with a story, as if narrative was the only thing that was important in life. Comics and movies and TV shows. I always had plenty for music, and the radio was always on, but it was something to listen to while doing other things, never an end to itself.

But music was a thing that I saw teenagers everywhere get into, so I did the practical thing and when my parents asked me what I wanted for Christmas in 1987, I wanted the tape player with an alarm clock. And that was fine for a little while, until my mates Shaun and Steven game me some Pink Floyd tapes to listen to and they blew my freaking little mind.

Soon I was thrashing other tapes on that miniscule player - Sgt Peppers, a Faith No More, some Cure and at least three Queen albums. But Pink Floyd was the thing, taking me to another world of sensory overload.

Music means the most to the young. Oh sure, as an adult, you can appreciate the shit out of things, and have deep knowledge, but you don't shape your whole personality around it like you do when you're a teenager.

I got a proper stereo system a couple of Christmasses later, and the alarm clock was lost forever. It wasn't missed, it was an absolute bitch to set the times on the thing, and the stereo would be playing every moment I had, and I didn't even have to be doing anything else while listening. The music was the thing.

And then, a few weeks ago, I found this alarm clock with a tape player in a charity shop and it's the best 10 bucks I've spent in ages. Not just because I was keen to find a tape player to figure out the mix tapes, but because it's the exact same model as the one I had when I was 12. It makes the same weird derp noise when it gets turned off and setting the times is still a hell of a thing, and the sound of the tunes on those mix tapes coming out of that minuscule speaker are as tinny as ever.

There are many, many tapes to get through and figure out what is worth keeping, and when it comes to finding out what music works best, you can't beat the original source.