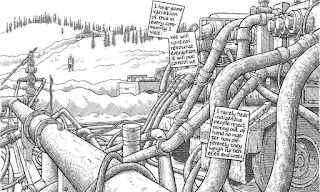 The journalist comics of Joe Sacco are dense and detailed by design, getting across a tonne of information with absolute efficiency, without ever losing the human heart of the story he is telling.

It's a lot to take in, but there is a slightly unusual effect caused by the way the captions are rarely straight and parallel. They often bend around people and landscapes, and match their movements, rolling through the scene with total momentum.

It might just be a symptom of Sacco's underground comix roots, because the freewheeling ethos of floating captions with odd angles has been there for decades.

But it also makes it so much easier to read, especially in something like recent effort Paying The Land, where he is getting so much across, and there are so many people to keep track of, and fascinating new histories to absorb. Keeping it as straight and rigid as a block of text in a textbook would make it so much harder to get through.

And it's something that is uniquely comics, impossible to replicate in any other medium. Keeping it lively with something that can only be done with pen and ink and the skills of an artistic master - it's what comics are all about.