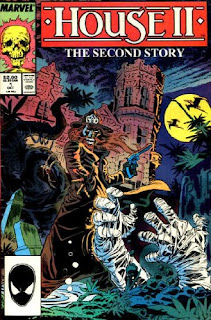 In 1987, when everybody else was expanding their mind with Watchmen and Maus and all that, I was reading and re-reading the House II adaption from Marvel Comics until it literally fell to bits. No wonder it took me so long to catch up with all the cool kids.

In my defence, I was 12 and was snapping up every single comic I could get. Watchmen was nothing more than a mention in a DC hype column - it was something about sugar cubes? - and I'd never seen an issue of the Comics Journal in my life and didn't know things like Maus or Love and Rockets even existed. I knew the Dark Knight Returns was a Batman comic, but that was it.

So in the rush of comic addiction, I read that House comic, because it was all I could get. And then I read it again and again, memorising the quips and one-liners, soaking up the 100% Marvel 80s art with unwarranted glee.

I loved those House movies, because they were horror for a 12-year-old, and I was a 12-year-old who loved horror. They were a slightly smart and had some good gooey effects and were just a little ironic, so you got alien jungles in the toilet and John Ratzenberger's deadpan electrician/freelance adventurer. I was far too young for a Texas Chainsaw Massacre, but I could handle a House.

It helped that the movies had that deceptively light touch in the first two outings. Even with a rare starring role for Lance Henrikson,  House 3 ruined it all for everyone by taking everything way too seriously, but the earlier two kept things lively with a knowing wink.

That Marvel adaption of the second movie did not win any awards, sold terribly and was probably just a bit of entertainment corporation synergy. But it was a Marvel comic, and that was all I needed at the time, and I'd take what I could get.