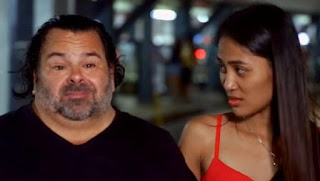 I've always been an absolute snob about reality TV, even with a hypocritical addiction to Storage Wars. But the lovely wife loves 90-Day Fiance, and watches several hours of it every week, and I can't help getting sucked in.

We live in a small place, so even though the concept itself is gross and voyeuristic, there is nowhere for me to go when she's watching it. That's fine by me, I just read a book, or cash in on the one hour of video-gaming that I set every week.

But it seeps through - why is that dude that looks like a turnip so petty and demanding about anything? Can't that other dude recognise that somebody is catfishing he fuck out of him - seriously dude, if you go to visit her six times in the Ukraine, and she never shows, she's not real.

And even in this cheapest form of entertainment, there are moments of real cinema - when Ukraine girl doesn't show for the sixth time, and the dumb and broken hearted American slinks away, leaving half a bottle of stale champagne behind, the cafe owner just shrugs, says she sees this kind of shit all the time, and uses his forgotten flowers to brighten up her joint. Legend.

And then there are twists - Ukraine girl does exist!  - and it's such a ride. I don't care if it's not cool, the way Rose told Big Ed she thought he was just a bad person was as stone-cold as anything that happens in Ozark or Luther. Non-prestige TV has its moments.