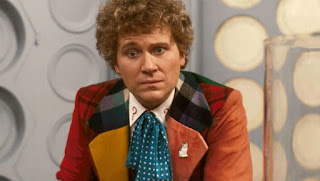 It's taken years and years, but I've just about watched every single episode of classic Doctor Who in order, and I'm about to get stuck into the final years with Sylvester McCoy. And it's taken a lot, lot longer than I thought it would, because I've been stuck on the Sixth Doctor era for since 2018.

There were always rough patches in the first few decades. Some parts - like the infinitely charming Tom Baker and Patrick Troughton years - were an absolute dream to whip through, but it wasn't easy to come up with the drive to sit down to another reconstructed episode of The Savages, or part five of a Pertwee story that still had two episodes to go.

But those damp spots were nothing compared to the flood of mediocrity in the Sixth Doctor years. Colin Baker's Doctor was a refreshing new take on the character, but he was still an insufferable jerk, bounding through tedious adventures with little of the wit or energy of the best of Who, and encouraged to play it as loud as that unfortunate outfit.

It had the tinniest version of the theme tune, which is something I take far too seriously; and pantomime-level production values and acting, which is easy to tolerate if the stories are there, but they're just not. Even episodes that had something going for them - even if it's just Paul Darrow chewing up the scenery - there are so many scenes of doughy white dudes in diapers running between the same two sets and loads of pointless bickerin

We all know the production team were doing what they could with the budget and resources they had, but it's easily  the most unwatchable Doctor Who in the long history of Doctor Who.

This was the first time I'd even seen a lot of those episodes, and I was hoping for the best, and that there could be something of a critical reappraisal for these efforts. They couldn't be as bad as every always said they were. But they are that bad.

The McCoy years are next, which is far more of a pleasant taste to end this feast of classic Who. The Cartmel Masterplan might seem big and clever in retrospect, but was insanely fucking cool at the time. I didn't miss any of those ones back in the day, and I'm ready for another look.