Nobody comes back from Mutieworld 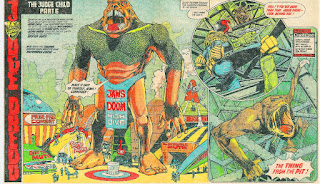 There were no amusement parks in my part of the world when I was growing up - something like Disneyland was as far off as Narnia. There were no roller-coasters or drop towers or anything like that, just the rickety old ferris wheel and merry-go-round that they trotted out every summer at the Caroline Bay Carnival.

And to be honest, that was probably a good thing, because I was shit-scared of amusement parks, thanks to the Mutieworld Danger Park in Judge Dredd.

Part five of the Judge Child Quest - first published in 2000ad prog 160 - was one of the very earliest Judge Dredd stories I ever remember reading, with Dredd heading down to Texas City to find the baldie who could save his city. This particular installment was most famous for introducing the Angel Gang to the saga, and for some typically magnificent Mike McMahon art, but it also featured the Mutieworld Danger Park, and I was appalled and fascinated by its casual carnage.

It was a park where you could go for fun and thrills, with a decidedly lethal twist. If you took on their challenges, there was a high probability that you were going to plummet to your doom, or get your head crushed by the creature in the pit.. There's some freefall combat in zero-g, shooting ranges with live targets and 'Topple the Dopple'. There's the Death Hill - which is just a metal nightmare - and the Invisible Mutie.

This was nightmare fuel for a kid, but I'm still reading new Judge Dredd comics every week 40-something years later, so it must have done something right. I've even braved a few amusement parks on the Gold Coast, and they weren't that scary.

Maybe if they offered up some big cash money, those parks could also throw in a bit of certain death.