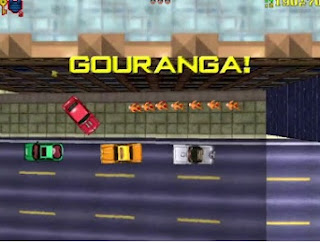 People ask me if I'm a gamer, and even though I've played video games on a regular basis since 1982, I can't say that I really am. Partly it's because I never got into online gaming, seeing it as a solitary and relaxing pursuit (or played with your mates at 3am in the morning), and partly it's because I'm always 10 years behind on the latest games.

I grew up at a time when Space Invaders was a dazzling display of technical brilliance, so the video game scene of 2010 is still mind-blowing to me, and good enough for my fun. I still cheat at Spider Solitaire to win (I cracked myself out of the habit about a year ago, but got sucked in again recently), and I usually get an hour to two every week to play some Grand Theft Auto, which has just the right mix of extreme gunplay and bonkers car chases.

I've been playing GTA since the days when you could get a GOURANGA for killing all the Hare Krishnas, but I'm still well behind, and am still playing in the GTA IV world. I tried to load V up on the computer a couple of years ago, but it just didn't have the grunt, so I'm stuck in Liberty City for now.

That's okay, I'm not sick of it yet. I'll play it a few more times, and by then the desktop should be fucked and it'll be time to upgrade and then I'll play GTA V. It came out in 2013, so I got a few to go before my decade catches up with me.