Don't throw it away: The random life of The Dice Man 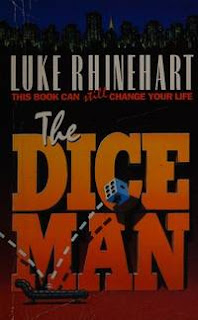 Like many people, I read The Dice Man by Luke Reinhart at exactly the wrong age, falling in love with the philosophy as an 18-year-old, and then quickly growing out of it.

It had an idea that was such a beautiful cop-out - if you left absolutely everything in your life in random chance, it's not your fault when you fuck up and hurt people. Except you're still choosing violence as an option, and forcing people into your stupid games can be deeply harmful.You don't have to sexually assault people just because you thought of it as an option, you fucking dickhead.

The Dice Man didn't fill that empty void of a young man's uselessness, still flailing around for looking for some direction in life, but it didn't hurt. It was another option, after all.

And I have always been weirdly addicted to harmless chance, and still do it, every single day. I have elaborate random-generating patterns centered on a base-nine number generator that I use when I'm trying to decide what book to read next, or what movie to watch.

It's so easy to get enticed by the philosophy of leaving everything in your life to chance, but it really isn't any way to live because you will undoubtedly end up hurting other people. But when you can't make a decision on what comic book to read next, you could do worse.