Looking for universes in the Friday night shopping 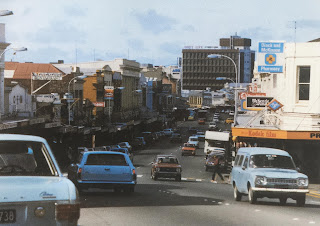 Going into town for the Friday night sales was still a thing when I was a kid, because weekends were not for shopping. Shops were only open on Saturday morning, and then closed for the rest of the weekend, so you had to get your shit done before it all closed down. Even the supermarkets shut up shop, which was awesome, because the carparks made terrific bike ramps for my Grifter.

Once every few weeks, for years and years, Mum would take us into town to do all the clothes shopping, and get new wool, and do whatever else Mums would do. I was always keen, because at some point they'd let me loose on the local book shops, and that was everything I wanted in life.

Going to the bookshop - any bookshop - was always a thrill, because every one had a dozen different kinds of comics and magazines and novels. Most of these thing were prohibitively expensive - I might be able to get 55 cents out of Mum for the latest 2000ad and one more comic if I was lucky and hadn't been a shit that week, and that was usually it - but browsing was free.

In the mid-eighties, in a town of 25,000 people, there were half a dozen good independent bookstores in a five block radius, so it didn't matter what part of town Mum wanted to go to, there was a slice of nerd nirvana nearby. Each store would get different things, you'd find Secret Wars in one store and Indiana Jones comics in another, but you wouldn't find those titles anywhere else, so you had to scope them all out if you wanted to know what was going on in the Marvel or DC universes.

There were also a couple of second hand bookstores, including the one store that was more responsible for a lifelong obsession with comics than any other, both down the slightly dodgier end of the main street, where I'd meet with my mates and we'd literally fight over Uncanny X-Men and World's Finest comics.

We didn't know how lucky we were. Apart from that second-hand store, which is still trucking along, there is nothing like that now, back in my old home town. Just a couple of chain bookstores left, selling the same shit everybody else sells. The hegemony of corporate book retailing, with selection reduced to a formula, with no curation and no personality.

And they're all open and available all day, every day, and nobody keeps the doors open late on a Friday night anymore. There was value in telling consumerism to take a fuckin' hike for a day or two, and there was value in all those old bookstores, now nothing but memory.