Stuck in the awful with Simon Hanselmann 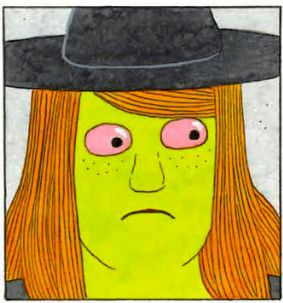 Simon Hanselmann's comics are full of awful people doing awful things to each other for no good reason. Each story is full of the miserable lives of young people in a grotty flat, and it would be hard to take if it was not rendered with a wonderful crudeness that is open, cheerful and colourful, even as it deals with the worst kinds of behaviour.

Hanselmann has devoted hundreds of pages to the mistreatment of Owl, and to Meg and Mogg and their magnificent fuck-ups, and the sheer gory terror of Werewolf Jones and his nightmare brood. It goes on and on and on.

But the best parts of always when somebody ends up sitting still on the sofa, wide eyed with the terrible realisation that they're a piece of shit, and they're trapped in an awful situation of their own making, and Hanselmann drags it so far out that it becomes a thing of beauty.

A lot of us go through these periods in our lives, hanging around with dropkicks and losers and people just like us, and sometimes we realise how futile it all is. Some of us end up like Werewolf Jones, roaring down a rollercoaster of depravity that can only end in an early demise, and many of us are like Owl, and eventually have enough of this shit and take off.

But even if we move on, there's no forgetting our own long, dark cycle of the soul that opens up while you're sitting on the sofa, stuck in time, and stuck in the awful.