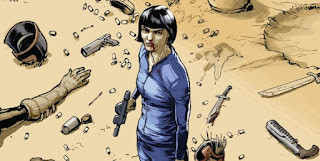 A good plot twist can sometimes be incredibly satisfying, especially when you absolutely don't see it coming. It might make you feel stupid, but you can also marvel at the unexpected. I figured out the Sixth Sense when I wondered why Bruce Willis was taking the bus everywhere (movie stars don't take buses), but I thought The Crying Game was all going to be about the IRA until it turned out to be about something else entirely.

But there's a certain kind of twist that can undercut the emotion of an earlier story, and while I don't see those coming either, they can feel a bit more sour, because you feel like a fool for actually feeling something in the first place.

Sure, it was clever when Xorn turned out to be Magneto all along, and it sit well with the overall themes of Morrison's X-Men run, but it still meant an earlier story - a genuinely moving solo issue that turned into a meditation on time and humanity - was a load of shit that manipulated you into a false sense of characterisation.

And it happened again recently, when the stunning exit of Judge Hershey from the Judge Dredd saga turned out to be a total fake-out. The new story by Rob Williams and Simon Fraser is absolutely bloody excellent, and Hershey does deserve a fittingly heroic send-off, but I found her death had the sort of hard-edged practicality that creator John Wagner does better than anybody alive, and that kind of no-nonsense approach can be incredibly moving.

Even with her demise, there was still some hope for the future, with the introduction of the daughters of Hershey, which seemed like the ultimate signal that the character's story had come to an end. But even that is tainted by the idea that she is still out there, doing the usual judging with extreme prejudice.

Stories like Judge Dredd should absolutely throw you curve balls, and take you places you didn't expect, but that can have the unfortunate side effect of making you feel like a bit of a muppet for getting a bit emotional about something that was designed to fake you out. No matter how good the new Hershey comics get, that sour feeling is always going to linger.
Posted by Bob Temuka at 10:14 AM