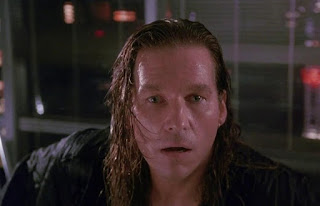 After watching The Fisher King for the first time in years recently, the thing that I found most unbelievable wasn't the whole Holy Grail quest, or even the deeply problematic idea that you can cure mental illness like that. It was something that came right at the start, where radio DJ Jeff Bridges inspires a mass shooter to kill a bunch of people with a shotgun, and Jeff feels so much guilt and shame about it that he blows up his life, and goes to live above a video store with the gorgeous Mercedes Ruehl.

As if a shock jock would ever take any responsibility for some of the bullshit they spew. So many books and TV shows and movies rely on the principle of name and shame - expose the president's nefarious deeds and he'll have to resign - and that just doesn't work anymore, because there are a lot of people in the world who are genuinely fucking shameless.

It's there in the intolerable disinformation put out by Fox News, and goes right up to that damp smell of a human being inhabiting the White House. They will lie and lie and lie, and do extraordinary harm with those lies, and then abdicate any and all responsibility for the consequences, because it's always someone else's fault. Tucker Carlson will stare back with a furrowed brow of utter confusion as people tell him that maybe people should just be kind to one another, President Fuck-knuckle will still think he looks like Winston Churchill when he tear-gasses a church..

In this context, maybe we could all use a bit more shame, a bit of self-analysis and regret. To blithely excuse away any sense of shame might be good for overcoming self-loathing, but you become a worse human being in every respect. It would be better to learn this lesson without inspiring any mass murderer, but at the every least, it should send us into the streets on a mythical quest of our very own.