The only time she was wrong, it was Neil Young's fault 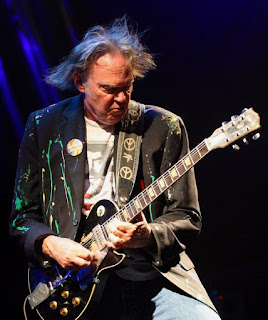 It took me a few years of married life to realise a very, very simple fact: the lovely wife never apologises first, and very rarely says she's wrong. I'm cool with that - strong women have ruled my entire life and I'm not about to let them stop now - and it certainly made life a lot easier when I realised I just had to say sorry first.

But the only time she has ever really admitted to my face that she was wrong about something was over a Neil Young song, and I had to get several people to back me up, and find a track listing of the gig before she admitted she was mistaken, because she was so certain that she heard him play a song he didn't play.

It was when we went to the Big Day Out in Auckland in 2009, and saw Neil Young do his thing. this was festival Neil Young - not the Crazy Horse Neil Young we saw a few years later - so he did all the hits and it was transcendentally good. Cortez The Killer still fucking shreds.

He played a lot of the big hits - Old Man, Hey Hey My My, Heart of Gold, Cinnamon Girl - but one thing he definitely did not play was Harvest Moon, even though the lovely wife swears she still has a perfect memory of that tune.

She had, unusually, taken a small amount of drugs, and remains convinced they were responsible for a proper aural hallucination, remembering a whole song that wasn't there.

She will never, ever admit she was wrong about anything else, but I got her there with this song. Still, I'm just a little jealous that she got an extra tune that nobody else did. It was a hell of a show.
Posted by Bob Temuka at 6:14 PM